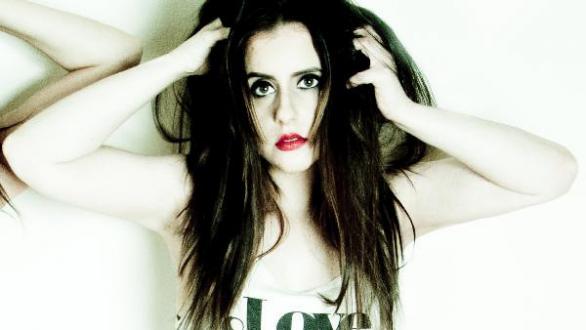 CORINNE FISHER is a stand-up comedian, writer & actor originally from Union, NJ. She first made a splash with her debut one-woman show Corinne Fisher: I STALK YOU (Dir. David Crabb) which had a run at The Peoples Improv Theater (The PIT) in the Summer of 2010 and was featured in Time Out New York. Since then, she has been a regular on the stand-up scene playing anything from dive bars to world-famous comedy clubs like New York Comedy Club, The Stand, The Standing Room, Caroline’s, Upright Citizens Brigade Theatre, Broadway Comedy Club, Comix, Laugh Boston, The Stress Factory & Gotham. Her second stage show, Almost Former Reality TV Stars, had a run at The PIT in June 2011 and told the true (albeit slightly exaggerated) story of how CORINNE and her real-life best friend, actor/model THOMAS WHITFIELD, were hired, then fired from their very own reality TV show. Known as @PhilanthropyGal on Twitter (slightly tongue-in-cheek…), in 2012 CORINNE performed in a series of benefit shows for the AFGHAN WOMEN’S WRITING PROJECT alongside other female New York comedians including SNL alum RACHEL DRATCH. Over the past few years, CORINNE has been selected to perform in the prestigious BOSTON COMEDY FESTIVAL, the WOMEN IN COMEDY FESTIVAL, THE LAUGHING DEVIL COMEDY FESTIVAL & the SHE-DEVIL FESTIVAL. On YouTube, she is the messed up mind behind Internet vlogger GINA SPRINKLES and the voice of ‘TOIBA’ on the cartoon web series MYSTERY SQUAD GALS, the brainchild of RYAN DUFF. Perhaps most notably, however, CORINNE is 1/2 of SORRY ABOUT LAST NIGHT…, her comedy writing and performance duo with KRYSTYNA HUTCHINSON. In December 2013, the duo launched Guys We Fucked: The Anti Slut-Shaming Podcast that now boasts a million+ listeners worldwide. Having featured celebs such as AMBER ROSE, STOYA, DAN SAVAGE, JIM NORTON, ARTIE LANGE, HORATIO SANZ, ANDY DICK, LIZZ WINSTEAD (Co-Creator of “The Daily Show”) and JENNI ‘JWOWW’ FARLEY (“Jersey Shore”) in addition to real gents they’ve had their way with, the podcast is consistently ranked among the Top 5 comedy podcasts on iTunes (but has reached as high as #1) and has been featured on The Huffington Post, The Daily Beast, Splitsider, Mother Jones, Perez Hilton, Elle, A.V. Club, E! Online, People, US Magazine, and Bust as well as OPIE & JIM on Sirius Radio and NBC’s LAST CALL WITH CARSON DALY. Previously, the duo wrote and starred in a self-titled sketch show that debuted at the Upright Citizens Brigade Theatre in NYC in the Spring of 2013 (Dir. Jon Bershad) and co-hosted a popular underground comedy variety show of the same name that has had homes at the Brooklyn Winery, The PIT and originated at Gotham City Improv. The show was like the best college keg party you’ve ever been to and featured comedy faves such as HANNIBAL BURESS & KURT METZGER as well as cult folk-rock sensation DAN BERN. This Summer, CORINNE and KRYSTYNA will be appearing for the second time at Montreal's JUST FOR LAUGHS FESTIVAL, arguably the most important comedy festival in the world. Last year, their first show sold out so quickly a second had to be added. They have also sold out the main room at The World Famous Comedy Store in Hollywood where they were joined by special guests DANE COOK, NEAL BRENNAN & OWEN BENJAMIN. Additionally, they were also guest editors for GLAMOUR MAGAZINE where they penned their own take on the all-too-familiar “How To Please Your Man” article. The duo's first book, "FUCKED: Being Sexually Explorative and Self-Confident in a World That's Screwed" drops on October 24th, 2017. In 2014, CORINNE made her television stand-up debut on FOX’s LAUGHS on the special “Under 30” episode. She also co-hosts a monthly show at NEW YORK COMEDY CLUB called NACHO BITCHES with BLAIR SOCCI (MTV’s “Ladylike”) where GARY GULMAN, YANNIS PAPPAS, ARI SHAFFIR, BONNIE MCFARLANE, KEVIN MEANEY, and SNL’s PETE DAVIDSON are regular drop-ins. In the Summer of 2015, FISHER and fellow comic KATIE HANNIGAN created THE COMEDIENNE PROJECT (Dir. TED ALEXANDRO), a show challenging its participants to write and perform twenty new minutes of stand-up sans sex, dating, or relationship material, which was accepted into The NYC Fringe Festival and is now a monthly show at The Standing Room. CORINNE holds a BFA in Film & Video from the School of Visual Arts, has been trained in the Stanislavski method by Joie Lee (“Do The Right Thing”) and is a graduate of the Upright Citizens Brigade Theatre’s prestigious improvisation training program. She loves ice cream and the Spice Girls.